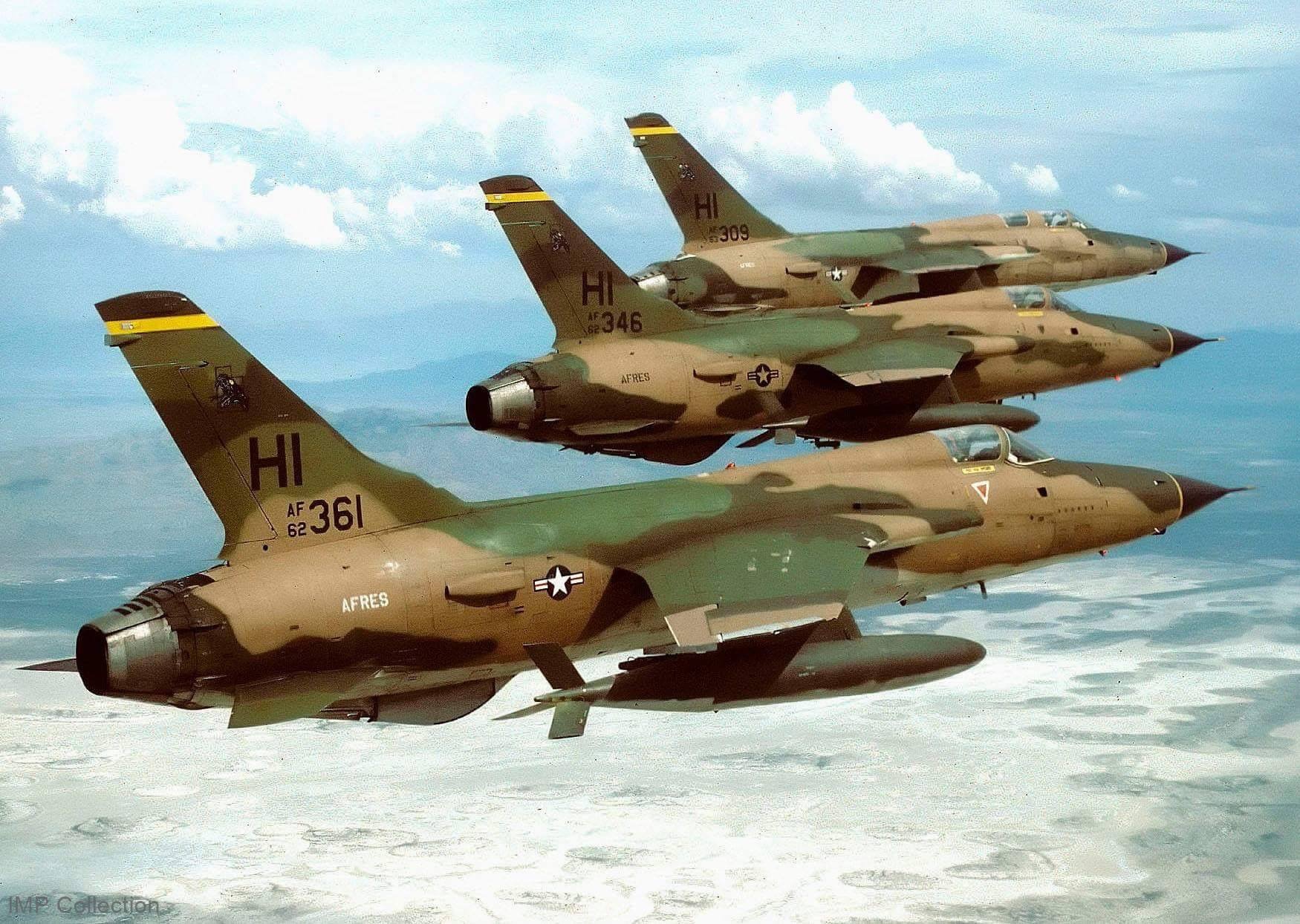 The Republic F-105 Thunderchief, was a supersonic fighter-bomber used by the United States Air Force. The Mach 2 capable F-105 conducted the majority of strike bombing missions during the early years of the Vietnam War; it has the dubious distinction of being the only US aircraft to have been removed from combat due to high loss rates. Originally designed as a single-seat, nuclear-attack aircraft, a two-seat Wild Weasel version was later developed for the specialized Suppression of Enemy Air Defenses (SEAD) role against surface-to-air missile sites. The F-105 was commonly known as the “Thud” by its pilots and crews.

The F-105 was armed with missiles and a cannon, its design was tailored to high-speed low-altitude penetration carrying a single nuclear weapon internally. First flown in 1955, the Thunderchief entered service in 1958. Following adoption, the F-105 could deliver a greater bomb load than the large strategic bombers of World War II like the B-17 Flying Fortress and B-24 Liberator. The F-105 was one of the primary strike bombers of the Vietnam War; over 20,000 Thunderchief sorties were flown, with 382 aircraft lost (nearly half of the 833 produced) including 62 operational losses. Although less agile than smaller MiG fighters, USAF F-105s were credited with 27.5 kills.

During the Vietnam war, the single-seat F-105D was the primary aircraft delivering the heavy bomb loads against the various military targets. Meanwhile, the two-seat F-105F and F-105G Wild Weasel variants became the first dedicated Suppression of Enemy Air Defenses (SEAD) platforms, fighting against the Soviet-built S-75 Dvina (NATO reporting name: SA-2 Guideline) surface-to-air missiles. Two Wild Weasel pilots were awarded the Medal of Honor for attacking North Vietnamese surface-to-air missile sites, with one shooting down two MiG-17s the same day. The dangerous missions often required them to be the “first in, last out”, suppressing enemy air defenses while strike aircraft accomplished their missions and then left the area.

As the largest single-seat, single-engine combat aircraft in history, the F-105 weighed approximately 50,000 pounds It could exceed the speed of sound at sea level and Mach 2 at high altitude, and carry up to 14,000 lbs. of bombs and missiles. The Thunderchief was later replaced as a strike aircraft over North Vietnam by both the McDonnell Douglas F-4 Phantom II and the swing-wing General Dynamics F-111 Aardvark. However, the F-105 remained in service in the USAF Reserve and Air National Guard until retired in February 1984 at the 419th TFW at Hill AFB, UT.

About Our Republic F-105D “Thunderchief”:

The American Airpower Museum Republic F-105D-31RE Tail# 62-4361 was accepted by the United States Air Force at the Republic Aviation Plant (The ground of the American Airpower Museum today) on 30 August 1963. Delivered to the 8th Tactical Fighter Wing at Itazuke AB, Japan in 1963. It would be transferred to the 6441 TFW at Yakota, AB Japan in 1965. The 6441 TFW would be transferred to Takhli Royal Thai Airbase, Thailand as the Vietnam War air war ramped up. In 1966 our F-105D transferred to the 388th TFW at Korat, RTAB Thailand. While assigned to the 388th TFW, 62-4361 was flown by the 469th Tactical Fighter Squadron during Rolling Thunder in December of 1967. It would go on to fly with the 469th, and then the 44th TFS until October of 1969. 62-4361 would be transferred as part of the 44th TFS to the 355th TFW at Takhli RTAB, Thailand. 62-4361would be one of the last F-105s to leave Southeast Asia in October of 1970 when the 355th TFW was the last F-105 unit be redeployed out of combat operations.  62-4361 would fly with the 184 TFG at McConnell ADB until 1979 and would then be assigned to the United States Air Force Reserve 465 TFS at Tinker AFB, OK in 1980. The same year 62-4361 would be assigned to its final flying assignment and fly with the 419th TFW at Hill AFB, UT and remain flying until the “Thud out” final retirement of the last F-105s with the 419th TFW in February of 1984. It would flown out of Hill and would be on display at Rickenbacker International Airport in Columbus OH until 2000. In 2000, with the help of Legendary Thud Pilot, and author of Thud Ridge, Col. Jack Broughton, USAF Ret. the National Museum of the United States Air Force would transfer 62-4361 to the American Airpower Museum where it has been on loan and displayed for the public for 20 years.